For a Progressive President, a Very Nonprogressive Educational Policy

(Cross-posted on the Social Issues blog) 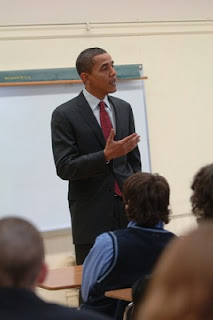 The progressive language implicit in many of President Obama's programs was no where to be found in the educational policy that he unveiled recently in his speech on education. Rather than an imaginative vision on what we need for public schools in a complex 21st century democracy, President Obama fell back on the language of neoconservatives for things like rewarding teachers and more school choice at least through more charter schools. Essentially, his proposal for new mechanisms for making changes in the educational system lacked any discussion on what these changes were meant to accomplish. For example, a recommendation for more charter schools is a rather neutral suggestion. The real question is: for what purpose and to what end? That requires a much deeper conversation about the public purposes of education for a democracy that is constantly reinventing itself. For some, it is an opportunity to introduce new ideas and innovative approaches. For others, it provides an avenue for choices within our public school system that can meet the diverse needs, aspirations and talents of our children. For still others, charter schools have been seen as a path to privatization and the dismantling of the public schools and teacher unions.

But more importantly, lurking behind President Obama's educational policy are the silent assumptions that have controlled the national debate for decades. A genuine national discussion on educational reform requires that we start to discuss that which has been undiscussable, namely, that the language of the market place has become the language of education. Students are talked about as the human capital that keeps the national economy competitive. But, as educational critic, John Goodlad, has constantly pointed out from surveys taken to determine parents' desires for their children, parents' visions are not limited to seeing their children as human capital or workers for a competitive market force. They consistently say that they want their children treated as whole human beings, nurtured in their growth, inspired in their dreams, and empowered in their civic voice. Of course, the usual retort here is that such goals are not inconsistent with the goal of producing a working force for the labor market. That is true. And so is the response by parents whose children have been marginalized in the schools. They very rightly are demanding that their children succeed in a competitive labor market at the same level that the children of the more privileged have succeeded. Both of these responses are legitimate. But the force of the arguments is to silence the national conversation that we should be having. In a public school system that serves both democracy and capitalism, the language of the market place prevails and all other discourses are on the edge. It is that conversation that the public needs to have. Nations are guided by the stories they tell about themselves. What story are we telling ourselves about the public purposes of our schools?


Readers who are interested in looking at the issues associated with "Schooling as if Democracy Matters," may want to read our Volume 3 Number 1 issue of the journal.
Posted by Lorraine Kasprisin at 2:42 PM

It seems that a number of us have been disappointed in how President Obama is looking at educational reform. After being in the business for fifty three years I wonder what the word, "reform" means anymore for I have heard it from most of the presidents regardless of political party affiliation. Just another word to throw around.

For those who want a more emotional plea after reading this well written statement, go to: www.teachersarepeople.blogspot.com and look for the entry dedicated to President Obama. Les

I think President Obama has made some very strong moves in terms of educational reform. As a blogger on www.top-colleges.com/blog/?isrc= wrote, "our top priority should be strategic spending instead of blind splurging brought on by panic." I'm pretty sure Obama and the secretary of education are doing just that. More onus must be on the states to govern stimulus distribution properly and i think Duncan's plan is just that.