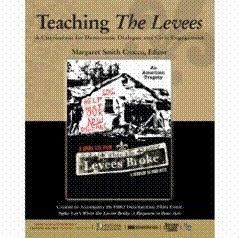 Editor: Authors Margaret Smith Crocco and Maureen Grolnick, whose article, Teaching the Levees: an Exercise in Democratic Dialogue, appears in our winter 2008 issue of the journal, give us an update on their groundbreaking curriculum that ties it to the artistic efforts to give voice to Katrina's victims. Margaret Crocco writes that our readers will find this quite different from what they might read in the popular media. We invite readers to respond to her post or to her article from our Volume 3 Number 1 Issue on "Schooling as if Democracy Matters."
This posting is cross-posted on the Social Issues blog.

Anyone who saw Spike Lee’s masterpiece, When the Levees Broke, will remember its “star” – Phyllis Montana LeBlanc. Straight-shooting, opinionated, and profane, Phyllis and her husband, mother, sister and autistic nephew were stranded in New Orleans on August 28th 2005 as Katrina struck. Like many native New Orleanians, they discounted the warnings of a massive hurricane until it was too late to evacuate. As the water level in their apartment rose in the days after the storm hit , the rescue helicopters flew past, ignoring their cries for help and moving on to those in even more dire circumstances. Phyllis and her family climbed onto refrigerators to float through water infested with alligators and snakes the two blocks necessary to reach higher ground. Phyllis and her husband spent nearly three years in a FEMA trailer while the rest of her family was relocated to Houston so her nephew could get schooling.

Spike Lee’s decision to tell the story of Hurricane Katrina through stories such as Phyllis Montana LeBlanc’s was not just a brilliant directorial decision (witness the scores of cinematic awards the film has garnered) but a shrewd maneuver in addressing what’s been called the “psychic numbing” and “compassion fatigue” that often accompany natural disasters, genocides, and other human tragedies. If Lee’s intention was to provoke empathetic responses for Katrina victims, his strategy was on target, according to decision researcher Paul Slovic of the University of Oregon.

According to psychological research, we are far more likely to be motivated to help out in the face of disaster if we can put a human face on events. Slovic notes that “images seem to be the key to conveying affect and meaning, though some imagery is more powerful than others” (p.8). He goes on to comment that, “When it comes to eliciting compassion, the identified individual victim, with a face and a name, has no peer” (p.8). For a copy of the full article, see: http://journal.sjdm.org/jdm7303a.pdf
Of course, Spike Lee offers not just one face and one story but well over a hundred faces and stories in his film, which is effective in conveying the multiple perspectives on these events. Over four hours of such narratives, interspersed with analysis and commentary by experts on poverty, race, science and politics, viewers of When the Levees Broke get a full sense of the human dimension, suffering, and costs of Hurricane Katrina. The film makes an extraordinary effort to use art to address the potential collapse of compassion in the face of so much misery.
In an appearance at Teachers College, Columbia University in September 2007 at the launch of the “Teaching The Levees” project, New Orleans City Councilwoman Cynthia Hedge-Morrell noted her gratitude for the tremendous outpouring of assistance from citizens—of all ages, races, and regions—to help New Orleans’ residents get on with life and rebuild (http://www.teachingthelevees.org/?page_id=90 ). I do not claim that Spike Lee’s film can be credited as the cause of this generosity. But to the degree that his film got the story out in such a compelling fashion on HBO, it is clear that When the Levees Broke gave a human face—or many human faces--to this epic story.

So, now, three years later, how are Phyllis Montana LeBlanc and New Orleans faring? Have compassion and volunteerism trumped the government indifference and belated investment in rebuilding to provide solace, support, hope, and meaningful recovery for residents of the city? Well, as you can imagine, the answer is a mixed one.
According to the Brookings Institute, which has produced an annual report on conditions in New Orleans since 2005 (http://www.brookings.edu/reports/2007/08neworleansindex.aspx ), positive signs can be found. In a report issued in late August 2008, Brookings indicated that New Orleans’ economy is improving; the population is returning slowly to a growing job sector; the trolley cars on Canal Street are reappearing (http://www.nola.com/news/t-p/index.ssf?/base/news-0/122768062889950.xml&coll=1 ). Eighty-seven public schools have been opened, including many new charter schools, with many new teachers recruited from around the country. Affordable housing, however, especially for low income service workers in the city, remains a big problem. One prominent home rebuilding project (http://archrecord.construction.com/news/daily/archives/081211PittHouses.asp) has been underwritten by Brad Pitt whose “Make it Right Foundation” (http://www.makeitrightnola.org/) has garnered extensive publicity for the architectural distinction of its homes as well as their high-profile celebrity backer.
The Brookings report also notes that “nonprofit groups, business leaders and some politicians are working hard to repair the city’s buildings and improve the criminal-justice and health-care systems.” Groups such as Women of the Storm, levees.org, Citizens for 1 Greater New Orleans, Catholic Charities, and the Citizens Road Home Action Team, among others, are leading the recovery effort on multiple fronts.
Nevertheless, the progress of recovery has proceeded at what seems a glacial pace to many residents of the city. The Californian hired to help rebuild New Orleans, Ed Blakely, has been the subject of much criticism for the slow pace of the recovery, his absenteeism, and the lack of visibility of Mayor Ray Nagin in the process (http://www.nytimes.com/2008/04/01/us/01orleans.html?_r=2&ref=us&pagewanted=all&oref=slogin). Unsurprisingly, many politicians have come in for criticism, at the city, state, and national levels. Many residents are hoping the Obama-Biden administration brings new attention to the city’s plight.

And what about Phyllis Montana LeBlanc? She wrote a book, which appeared in August 2008, while living in the FEMA trailer. Entitled Not Just the Levees Broke: My Story and After Hurricane Katrina, the book was published by Simon and Schuster. LeBlanc did an interview with Salon.com (http://www.salon.com/mwt/feature/2008/08/27/phyllis_montana_leblanc/ ) and seems to have used her faith and family to sustain her throughout the ordeal of the last three years. Spike Lee wrote the forward to the book, and it seems that her colorful personality and commentary have made her into something of a celebrity herself.

Despite the positive aspects of this update on New Orleans three years later, it is also clear that the devastation wrought by Katrina and the continuing debate about how best to remedy the damage and prevent further disasters continue. Let me conclude by turning to other works of art, completed and in progress, which can also be seen as efforts to put a human face on tragedy.
Perhaps you’ve heard of Trouble the Water, the “home movie” shot by self-professed “street hustler” Kim Roberts and crafted by professional filmmakers Tia Lessin and Carl Deal (http://www.salon.com/ent/movies/btm/feature/2008/08/21/trouble_the_water/), which won an award at the Sundance Film Festival. In the works is The New Orleans Tea Party by Marline Otte and Lazlo Fulop (see a clip on YouTube at: http://www.youtube.com/watch?v=PzA4UR-w8PQ ). This film gets at some of the controversies related to rebuilding—by whom and for whom and to what end, with footage shot in early 2008. It also addresses issues of politics—global and local related to Katrina—and the effects of climate change on the city. Finally, the award-winning filmmakers who created Revolution ’67 (http://www.bongiornoproductions.com/REVOLUTION) about the 1967 race riots in Newark, New Jersey, Marylou Tibaldo-Bongiorno and Jerome Bongiorno, are working on a “love story” set in Venice and New Orleans—two cities threatened with extinction in the face of global climate change and rising sea levels. If a love story can make the threat of global climate change and a world that is too “hot, flat and crowded” (http://www.thomaslfriedman.com/bookshelf/hot-flat-and-crowded), as Tom Friedman puts it, real to us, then it will offer an interesting twist on Slovic’s theory that putting a human face on disaster is the best way to trigger a response in action.
If there’s any good news in looking back at the tragedy of Katrina, it may lie in enhanced recognition of the need for more democratic dialogue and civic action about the problems we face as a nation. We can thank enlightened filmmakers like those mentioned here for helping motivate us to engage in both talk and action. With a new administration coming to Washington, DC in January 2009, we can hope that they will join the citizens of New Orleans and concerned citizens across the country in taking the steps necessary to prevent other such disasters and help residents of the Gulf Coast to continue to recover from the lingering problems associated with Hurricane Katrina.
Posted by Lorraine Kasprisin at 6:48 PM

If you would like to dig a little deeper as to what has happened to the public schooling system in New Orleans Post-Katrina, a good read is Captializing on Disaster: Taking and Breaking Schools by Dr.Kenneth Saltman of DePaul University.

Also, we at School Choice Illinois have just started a new blog! Check us out.